The photo and text below were taken from an article posted on salon.com. 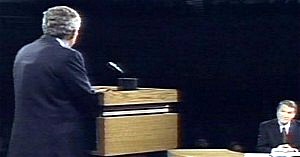 Oct. 8, 2004 | Was President Bush literally channeling Karl Rove in his first debate with John Kerry? That’s the latest rumor flooding the Internet, unleashed last week in the wake of an image caught by a television camera during the Miami debate. The image shows a large solid object between Bush’s shoulder blades as he leans over the lectern and faces moderator Jim Lehrer.
[snip]
Suggestions that Bush may have using this technique stem from a D-day event in France, when a CNN broadcast appeared to pick up — and broadcast to surprised viewers — the sound of another voice seemingly reading Bush his lines, after which Bush repeated them. Danny Schechter, who operates the news site MediaChannel.org, and who has been doing some investigating into the wired-Bush rumors himself, said the Bush campaign has been worried of late about others picking up their radio frequencies — notably during the Republican Convention on the day of Bush’s appearance. “They had a frequency specialist stop me and ask about the frequency of my camera,” Schechter said. “The Democrats weren’t doing that at their convention.”
[snip}
As for whether we really do have a Milli Vanilli president, the answer at this point has to be, God only knows
If we do have a Milli Vanilli president, I’m hoping that he’s exposed, and soon. That should make more Undecideds decide against him. I’m hoping that every anti-Bush who has the capacity makes the effort to tune in on all possible frequencies and prevent it from happening tonight. Bush can’t fly airplanes on his own and he can’t fly over the airwaves that way either. EXPOSE THE IMPOSTER PRESIDENT!!
Other links to concerns over the box on Bush’s back are here and here.
And the latest from here:
So the official denial is now on the record. Any readers or viewers who think they can prove otherwise please do so. Any bloggers or chatters who can offer more than conspiracy theories — see dailykos.com (Sat Jun 5th, 2004 at 18:43:30 GMT) and rense.com as well as postings on Salon.com and the Washington Monthly online — please do so immediately. And any media professionals – like the “top Washington editor for Reuters” who reportedly told isbushwired last spring that “Sure, Bush uses an earpiece sometimes. State of the Union — he had an earpiece for that. Everybody knows it.” — please identify yourselves.

1 thought on “EXPOSE OUR POSEUR PRESIDENT”