Three’s a magic number, and I’m all for making magic.
And so on with the Sorority Saga of the adventuresome fourteen.
We all wondered if we would recognize each other after more than forty years. All of us had been married; four of us are no longer, and of those four, one is a widow. Almost all of us have kids, and, of those, as far as I could tell, all have grandkids; at least one had a child who died; almost all of us had taught at least for a while. An alarming number are breast cancer survivors. We all have a few extra pounds — some more, some less. Five do not color their hair, and three of those are wonderfully white. (I made sure I touched mine up the week before the reunion.) The years showed on all of our faces and our bodies — some more, some less.
What was funny was that one of the sisters admitted that as she walked into the bar and looked around for the others, she found herself searching the faces of the twenty-something females who were there. That’s how she was remembering us all — as we were the last time she saw us.
How did we recognize each other? Mostly BY OUR VOICES — both the actual physical voice and the “selves” that we revealed in WHAT we voiced. We all (aurally) sound the same as we did when we called to each other up and down the stairs of the sorority house. As we had a chance to chat and catch up and reminisce, it became apparent that those of us who were more conservative back then, still are — some even moreseo. And on the other end of the spectrum are one of my apartment roommates and, heh, me.
And our eyes are still the same — not the skin around them, but the souls they reflect. We also recognized each other by our eyes.
No one passed around photos of their kids and grandkids (well, I admit I did whip out a goofy photo of my grandson to show two of my ol’ roommates). Instead, we spent our time together remembering and laughing (loud and long), and adding to the legends and lore of our girly days. 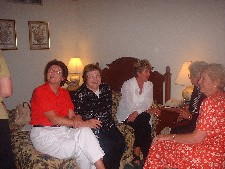 In between, we caught up on where we were in our lives, chatting in small groups or one-on-one with those to whom we were closest.
Who says you can’t time travel! We did. We took ourselves back more than forty years and, for one night, we were carefree, fun-loving girls again.
OK. So you want to see “then” and “now” photos, right?
Well, here are three of us hanging around the sorority house in our pajamas in 1960. (Somewhere I have a photo of the four of us and when I find it, I’ll replace this one.) 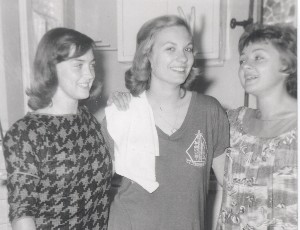 And so, as way to keep sharing our voices, I’ve begun setting up a gangblog for us, since we all have computers (although some are more adept at using them than others). And so Beta Zeta (which no longer exists at our college) will move into the virtual 21st century, laughing all the way.

Hats off to thee, BZ!